I don’t know when the obsession began, but it is official. Quinn is OBSESSED with Lightning McQueen and all of his friends! It was obvious from the beginning that Quinn was not going to take to your typical lovey. I so wanted him to have a soft little blanket or stuffed animal that became his comfort, but my wish did not come true. It started with golf balls, of all things, and quickly turned into Thomas by his second Christmas.
But, somewhere between Christmas of 2008 and Fall of 2009, Lightning took first place! It’s crazy how he has really taken to all of these things with no direction from us! It truly is what he loves! But, the train table stays pretty quiet now-a-days and my house is COVERED with “Cars cars” from front to back! 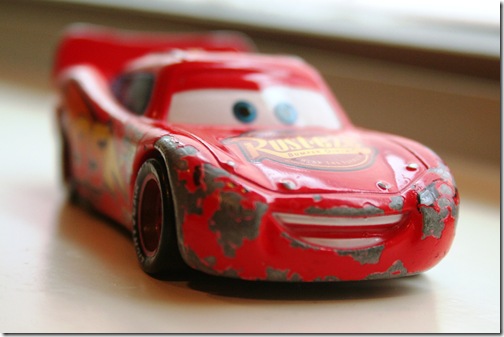 And, even though there are dozens upon dozens, there is a favorite…a “lovey” of sorts! Quinn either calls him “regular Lightning” or “scratched up Lightning” and he goes ALMOST everywhere. (I’m sure you’ll notice his cameo appearance in MOST of our pictures!) There may be another friend in the other hand, but this one remains the constant. Oh, the times we have lost him have been traumatic, because no other would do…but, thankfully, he’s always shown up! 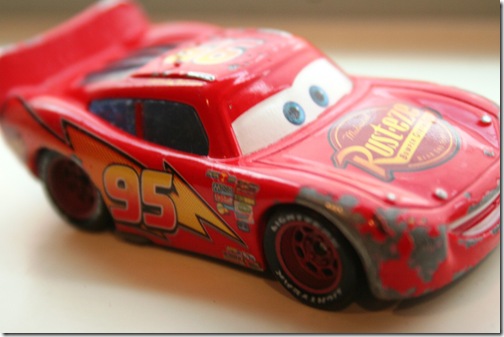 So, as you can imagine, MANY of our conversations require talks about Dinoco, Lightning, Mater and the Piston Cup, but I wouldn’t have it any other way! It’s fun having a boy…and I look forward to always falling in love with whatever he loves. 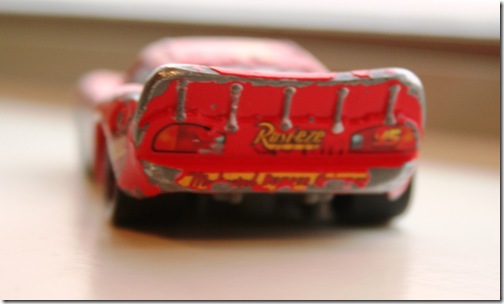 {Stay tuned for a VERY excited boy that will soon be celebrating with a full-blown Lightning McQueen 3rd birthday party!}
Memories by ThePoeFam at 9:22 PM

SO sweet!! We're gonna have to get our kiddos together for some Lightning time. Their love for McQueen sounds really similar ;).

Oh my gosh, Parker's going to have a Lightning party too!! He is completely obsessed with all things CARS as well. I noticed a few posts ago that Lightning was in every picture and it cracked me up...meant to comment and never did, sorry. I cannot wait to see your ideas for the birthday party, as I may have to borrow a few if you don't mind. ;)

Cole is OBSESSED with anything CARS related! He has the entire cast and probably 4 lightning mcqueens. I love how "loved" Quinn's are! What a sweet boy!

We are also having a Lightning McQueen party too (just one week earlier!) but my party planning skills are definitely not on the same level as yours! Can't wait to see the pics!