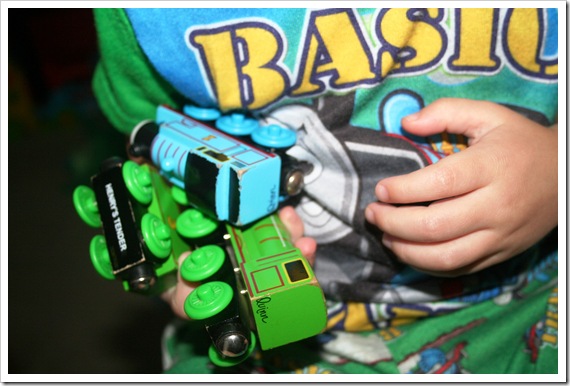 On Sunday, I took Quinn to his class. Oh how things of changed! No more are the days of tears and screaming at the drop off. There may be a little skepticism, but he quickly notices his friends and the train table in his 2 year old class, and happily walks in to play! …

So, after I went to church, I headed back down to the children’s wing to pick up my little guy. I’m always so excited to see him even though it’s only been about an hour and a half. … But, today, my little guy wasn’t happily playing like I expected. He was in a teacher’s arms and he was SCREAMING! Crying!!! BIG tears were running down his face! … Immediately, another teacher explained to me that he was heartbroken because he was insisting that three of the trains were his! And, obviously, the teachers were explaining to him that these trains belonged to his class! Despite their attempts, and showing him his opened backpack with no trains inside, he refused to comply. “These Quinn’s trains!!!!”

I knew that I must intervene. I walked into the classroom and calmly showed him where the trains belonged. I told him that his trains were at home and we would be there to play with them very soon. But, every time I said something that implied that the trains were not his, the tears came faster! Bless his heart! I didn't know what to do! He was heartbroken and was obviously wanting to STEAL the church’s trains. It got so bad that the teacher suggested that I just take them and bring them back next week. I refused! He needed to understand!

It was time to take a different approach. I picked up other trains (ones that he had at home as well) and said, “Is this Quinn’s train!” “NO!,” he would reply. I did this numerous times and always got a “no” response. Then, I picked up the three that he had been holding, asked if they were Quinn’s, and he said, “YES!”

As I was holding the Thomas, and asking him my questions, I noticed something faint on the back. So faint that there was NO way you would have seen it if you weren't looking. In tiny faded Sharpie letters I saw “Quinn!” His name was on the back of this train…it WAS his!!! Thomas must have been living at the church for a month, if not longer. So, I showed the teacher and we all sat there amazed at how Quinn KNEW that it was his! …

We all immediately apologized and let him hold the Thomas that he loved so dearly! We couldn’t believe it!… After that, I convinced him that Henry belonged to the church, and he seemed OK with that!

So, my little man immediately dried his eyes, smiled, and ran out of the class with his Thomas in hand! Sweet little love!

As soon as we got home, I got out that same Sharpie and wrote his name on every (there are WAY to many) train that he has! He was so excited that “Mommy colored letters on my trains!” He had so much fun finding his name on each and every one! … And, in taking inventory, we noticed that Henry was missing. So, guess what? That Henry at the church belonged to him too! Daddy got it the next day, and we proudly wrote “Quinn” on it as well!

Now, I don’t think he’s too traumatized, but I know it’ll take some time to forget what happened. Since Sunday, he’ll say, “My so sad at Sunday School! My cry big tears! Those my trains! I got them!” … So, from now on, I won’t be so quick to assume that he doesn’t know what he’s talking about. That little two year old brain is so much smarter than I realize. What a precious little…smart little…man! I love him!

I love their little brains and tender hearts! Smart boy!

that is so funny! Did he take them out of his bag that morning or where they left there from a previous time? He is so smart!