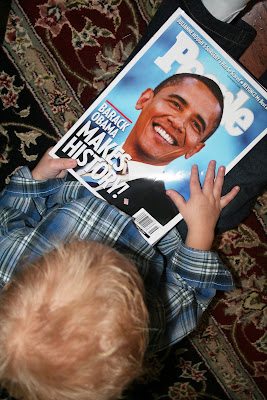 When I got the new People, I found it the perfect opportunity to document this historic event. Even though Obama may not have been who {Quinn} voted for, it is cool that we are able to live to see the first black man become President of the United States...and we are believing for good things!...Read the awesome article below. about praying for our new President and our precious country... 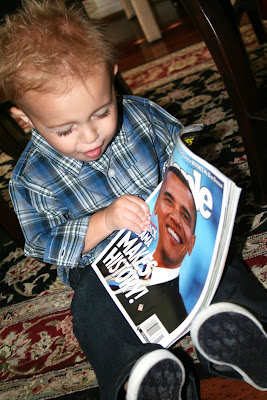 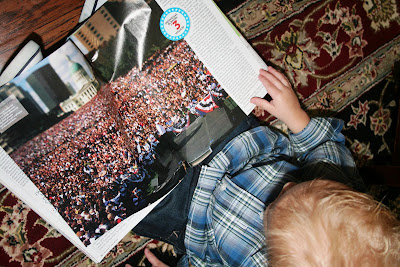 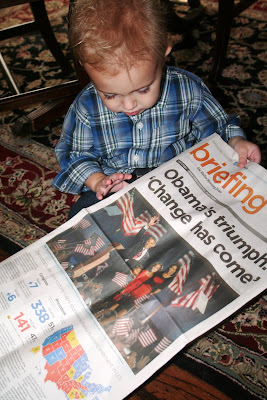 Well, my country and much of the rest of the world are electric with the election of Barack Obama as the new President of the United States of America. To say that it is historic, is a gross understatement.
Justin Taylor and Al Mohler, have both inspired some reflection on the question of how we as Christians --Bible-believing, Reformed, Christians-- ought to pray for him, and I have freely borrowed many of their words and thoughts on this. But here are some ideas for leading our people to pray for our President-Elect. Barack Obama.
We ought to commit ourselves to pray for our new President, for his wife and family, for his administration, and for the nation. We will do this, not only because of the biblical command to pray for our rulers, but because of the second greatest commandment "Love your neighbor" and what better way to love your neighbor, than to pray for his well-being. Those with the greatest moral and political differences with the President-Elect ought to ask God to engender in them, by His Spirit, genuine neighbor-love for Mr. Obama.
We will also pray for our new President because he (and we) face challenges that are not only daunting but potentially disastrous. We will pray that God will grant him wisdom. He and his family will face new challenges and the pressures of this office. May God protect them, give them joy in their family life, and hold them close together.
We will pray that God will protect this nation even as our new President settles into his role as Commander in Chief, and that God will grant peace as he leads the nation through times of trial and international conflict and tension.
We will pray that God would change President-Elect Obama's mind and heart on issues of crucial moral concern. May God change his heart and open his eyes to see abortion as the murder of the innocent unborn, to see marriage as an institution to be defended, and to see a host of issues in a new light. We must pray this from this day until the day he leaves office. God is sovereign, after all.
For those Christians who are more dismayed than overjoyed about the prospects of an Obama presidency, there should be a remembrance that as our President, Barack Obama will have God-given authority to govern us, and that we should view him as a servant of God (Rom. 13:1, 4) to whom we should be subject (Rom. 13:1, 5; 1 Pet. 2:13-14). Thus, again, we are to pray for Barack Obama (1 Tim. 2:1-2). We are to thank God for Barack Obama (1 Tim. 2:1-2). We are to respect Barack Obama (Rom. 13:7). We are to honor Barack Obama (Rom. 13:7; 1 Pet. 2:17).
For those Christians who are more overjoyed than concerned about the prospects of an Obama presidency, there should be a remembrance of our ultimate allegiance: Jesus is Lord (and thus, He, not we, decides what is right and wrong), we serve God not man, and the Lord himself has promised to establish "the distinction between the righteous and the wicked, between one who serves God and one who does not serve him" (Malachi 3:18). Thus, where our new president opposes or undermines biblical moral standards in our society, fails to uphold justice for the unborn, undermines religious liberties or condones an ethos that is hostile to the Gospel, we will pray for God's purposes to triumph over our President's plans and policies.
Without doubt and whatever our particular views may be, we face hard days ahead. Realistically, we must all expect to be frustrated and disappointed. Some now may feel defeated and discouraged. While others may all-too-soon find their audacious hopes unfounded and unrealized. We must all keep ever in mind that it is God who raises up leaders and nations, and it is God who pulls them down, and who judges both nations and rulers. We must not act or think like unbelievers, or as those who do not trust God.
Memories by ThePoeFam at 6:15 AM

I was with {Quinn} on my vote...but I still feel hopeful...I think we are all ready for a change, either way. And the fact that he made history as the 1st back president is just icing on the cake :)

Beautifully stated! He didn't get my vote either, but I am hopeful for good things to happen under his leadership. I have already starting praying for him and his family. They need our prayers!

I must also admit that I am happy to see the 1st black president in this life time.

I'm doing Book-It in my classroom this year...the kids love the pizza coupon! :0)