..So, after a week of crazy phone talking, I went home to Abilene for my Dad's baptism. It was such a special time for our family and I was so thrilled to be there for the event. 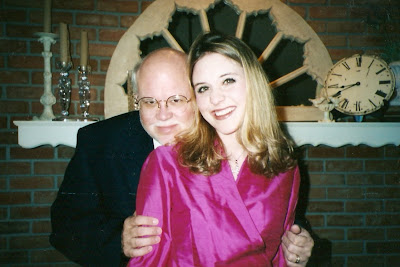 But on that Sunday evening, April 14th, 2002, I had a date! ... A date with the guy who had stolen my heart over the phone and I was SO nervous to talk with him face to face. Honestly, I couldn't quite remember what he looked like. I remember trying so hard to picture his face and all I could remember was that I thought he was cute, I knew he was tan, that his eyes were a little close together, and that he was short. (Awful, huh!?) I remember talking to Thompson on the phone and sharing my worries about not remembering what he looked like, and she said, "Brittney...he's HOT!!!" I remember laughing and being thankful...her opinion made me feel much better!
So, on that Sunday night I put on my cute khaki capris, a deep purple sleeveless shirt, and my flattest black sandals (I hated to be taller than him). I felt cute! I said goodbye to my parents as I "suggested" that they go to dinner a little early and waited for him to come to my parent's house to pick me up. ...When the door rang, I think I almost peed my pants, but managed to open it, smile and hug the cute, but kind of short, boy that was standing on the other side. It was weird to see him and talk to him! We got in his silver (correction made...You're right, Cliff, cars aren't my thing!!!) Mazda Protege and he asked if I wanted to see his apartment and meet his puppy.
When we got to his apartment, I was impressed by the neatness but was a little annoyed by the hyperness of his dog, Kia. She was ALL over me! Jumping...licking...a mess! After the introduction, we went in his room. He told me to sit down...so I did, on the bed, while he pulled up a nearby chair. I remember him holding my hands and immediately saying, "I don't play games!" I said..."OK?! Me neither!" Then, he proceeded to say that he wanted to either be with me and be serious about it or to not. He said he was not at the stage in his life that he wanted to date just to date...but with the intent of having a future. I listened as he proceeded to praise me and tell me that he wanted that with me. Wow...what a DTR!!! I'm sure I tired to look calm and collected, but my insides were screaming! At that moment, I considered Matt Poe my boyfriend and was ecstatic!
After the DTR, he asked me if I wanted to get Bueno and take it to the park to eat it. Most would think..."BUENO!??? For a first date!?!?"...but I was thrilled! Yummy! (Later, I found out that Matt doesn't take girls to fancy places on first dates...he feels that it shows their true colors! HA!) So, I got my bean burrito and muchaco and we headed to RedBud Park near my house. We found a little picnic table and had a great time talking and eating. I remember feeling comfortable and relieved. After we ate, we walked over to the Prairie Dog down at the park and watched them play for a bit. It was fun. Then, it was back to his place to watch a movie he had rented...Serendipity. He thought I would like it! Um, YEAH! He knew me too well already. We cuddled on the couch as we watched the preciously romantic movie and I was on cloud 9!
*
As the credits started to roll, I remember feeling that look that made me know he was about to kiss me...and I was right! He did...and it was great! Not awkward like so many first kisses...but it did happen on our first date! A little soon, but considering how fast everything else was moving, it seemed appropriate! Soon after, he took me home...and I think I probably smiled as I slept!
***
The next day, Matt and I went to lunch at FUJI (my favorite Japanese steak house), to see Ice Age, swung by the house so that he could meet my mom and then decided that it would be fun to hang out with Sarah and Ryan. They went to HSU and Matt was friends with Ryan. (Ryan was the one that told Matt that I was high maintenance at one point during our long phone conversation week!...Later, when Sarah found out, she almost killed him...and when Matt told me, I almost killed him too! Apparently, he meant with boys...but whatever! I'm over it!!! :) ) We got snow cones at the famous Cajun Cones and headed back to HSU campus to walk around, play with the ducks, and take some pictures. I remember loving my time with my boyfriend and my best friend...and we all had so much fun together...which was super important to me! 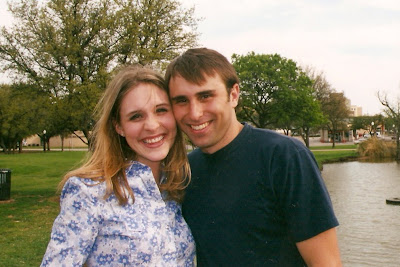 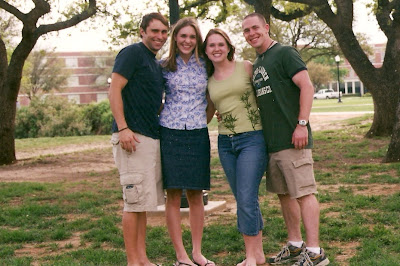 That night, I went to Matt's basketball game, had dinner at Burger King, went by the house so that he could meet my dad, and went to his apartment to watch Blue Streak. It was a full day...starting at 11:30 a.m. and ending at 1:15 a.m. At one point, while driving around, Matt played a few songs for me that he felt should be "our songs!" One was "Whenever You Call" (Brian McKnight and Mariah Carey) and the other was an NSync song that I'd never heard called Something Like You...the words were perfect...cheesy when you read them...but perfect...
*
So many times i thought i had it in my hands
But just like grains of sand, love slipped through my fingers...
So many nights, I asked the lord above
Please make me lucky enough to find a love that lingers
Something keeps telling me that you could be my answered prayer
You must be heaven sent i swear...
{Chorus}
Cuz ...something happens when you look at me i forget to speak
Something happens when you kiss my mouth my knees get so weak
Could it be true this is what God has meant for me cuz baby i can't believe
That something like you could happen to me
*
Then, on Tuesday morning, Matt came over to say goodbye before I left..At this point, I like him! I REALLY like him! He's too good to be true! ...And, when I drove back to Baylor, my phone died...and later, Matt told me that he was panicked. It feels so good that he cares so much...and, he's really not short at all! The flat shoes can stay in the closet for the next date! :) 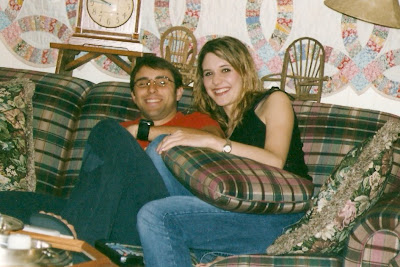 Memories by ThePoeFam at 1:51 PM

i'm so proud cajun cones is a part of your story!

Good to know I thought he was hot!!! That should have sealed the deal! Love reliving this!!!

Oh my...this is hilarious to think back on! I remember it all like it were yesterday though! I remember you telling me how annoying Kia was, which is hilarious now that she's your oldest child! So funny. :)

Black Mazda Protege? Try silver! But then you've always said that cars have never been your thing. Your story is fascinating to us... we've never heard most of it! But then, details aren't Matt's thing, are they? Looking forward to the next installment!