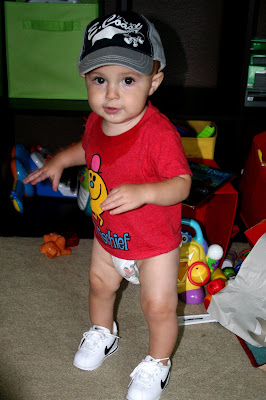 soos: noun
1. the word for Q's daddy's obsession
2. the objects that Quinn wears on his feet
3. the word that Q says when he walks around carrying his Daddy's shoes
4. the item that Q's Slickpaw loves to buy him (see the shiny, new white pair in the picture above)
heh-wo: interjection
1. what Q says as he holds the phone up to his ear
2. what Q says when he sees us holding the phone up to our ear
cah: noun
1. Quinn's word for car
2. He does the sign language for it as he says it...the other day at the pool, Q was shaking his hands and saying "cah" every time he heard a car go by. It took me a while to figure out what he was doing, but when I did, I was so proud. I'm telling you, that BabySigns video must be magic. I need to get more!
cook: noun
1. Quinn's word for book
2. Not to be confused with "Bible"...he knows the difference
3. What Quinn brings us right before bedtime as he backs up to sit in our lap...love it!
baybee: noun
1. the name that Quinn has given himself
2. the word that Q says when he sees his picture...and he says it with a smile
no no no no no: verb
1. the words that Q says while shaking his pointer finger
2. the words he often says when he points to the puppies
3. the words that he says when he points to something that he's not supposed to be touching
Memories by ThePoeFam at 7:28 PM

Email ThisBlogThis!Share to TwitterShare to FacebookShare to Pinterest
Labels: Definitions

Cara Carroll said...
This comment has been removed by the author.
12:54 AM