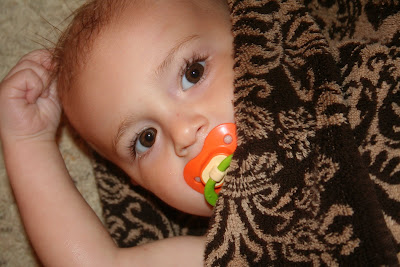 For a long time now, Quinn has given us a very distinct clue when he's ready to go to bed. We'll give him his passy around nap or bed time, and he'll immediately raise his hand to his head and start playing with his hair. He'll scratch his little head, sometimes with both hands, and go to town on his passy! We'll often look at him when he's in his carseat, and he'll be scratching his head as we're drving down the road. During his morning bath, he gets relaxed and his hand usually finds his wet hair. Apparently, I twirled my hair when I was little (sadly, I think I still do it)...and I hope that this little trait is one that Q hangs on to for always! It's just so sweet!
Memories by ThePoeFam at 8:46 AM

That is so sweet. Willie rubs his eyes, and gets a little cranky. I love the picture of Q, man he is such a cutie pie!

Reid does the EXACT SAME THING!!! He also likes to play with our hair. We can always tell when he's tired because that hand goes right up to the top of his head.

What an absolute doll! I love this precious picture! And, I love little Q!