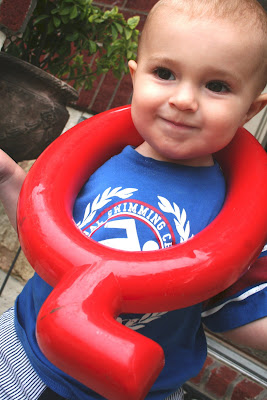 Here are 14 things I want to remember from Quinn's fourteenth month...

1. My little man is super snugly! He'll stop playing to dive into me and hug and will walk to us when we squat down so that he can squeeze our necks! My favorite is when I go in his room to get him from his crib and he stands up to hug me around the waist. He did it all on his own about 3 weeks ago and now he does it every time! It melts my heart!
2. Q is walking EVERYWHERE! (the"red Q" pics from this month prove this perfectly!) I feel like he's just minutes away from running. He never crawls anymore...unless it's over a threshold (hilarious!)...and seems so proud of his walking accomplishment. We're lucky to have had very few nasty falls! We're hoping to keep that up!
3. Quinn is a climber...he loves to hike up his leg and try to get up on chairs, out of his crib, or up stairs! I'm so nervous that he's going to hop right out of his crib someday soon!
4. This month I spend my first night away from Quinn! After 401 nights of kissing him goodnight, I was a little sad, but the retreat that I went on was wonderful! I have to admit that I was driving way above the speed limit to get to my house to squeeze him! I missed him so much!
5. Hats have become very fascinating to Quinn this month. He is very interested when people are wearing them and will sign "hat" when you ask him where his hat is. He has started letting us put hats on his head again and will leave them there for a while. He does like to take them off and try to put them back on. And he says "hat" every time he sees his.
6. Bubbles are Quinn's latest obsession! But more than the actual bubble, he loves the container. Some mornings he wakes up saying the word and walks around holding his bubbles. Krozby is a HUGE fan of the bubbles and goes nuts to eat each one as they're floating in the air. Therefore, when Q holds the bubbles, he has an instant shadow. Krozby's just waiting for the day that Q can blow them on his own!
7. Quinn has started leading me places all of the time. He'll grab my hand if I'm sitting down, and point to where he wants to take me. It's usually to get 'cackers' or a 'poon.' He seems so big as he's leading the way!
8. Quinn's vocabulary is definitely expanding. This month he added many words to his list...hat, Bible, bubble, hot, night night, 'poon' (for spoon), that, 'mo' (for more), 'ssssss' (for a snake sound), 'shs' (for shoes), wah wah (for water)...and I'm sure I'm forgetting some. Look for my "definitions" posts that will be frequent, I'm sure!
9. Being outside is Quinn's favorite place to be! Since our backyard isn't at all appealing, we're often on our front sidewalk. He loves to crawl up and down the steps, play with bubbles, watch the rolly pollys and ants, point to the birds, and play with the junk mail! We've also gone to the pool and are going to be spending lots of time there in the hot summer days to come!
10. We had a fantastic Mother's Day! How fun is it for me to have another holiday to celebrate because of my precious little man? It is a day that makes me feel very blessed!
11. Quinn is still eating well...just not really many veggies! His meals/snacks typically include grilled cheese, PB and J, nutra grain bars, applesauce, bananas, strawberries, chicken nuggets, burritos, pickles, green olives, cheese, crackers, milk, apple juice, french fries, turkey, veggies hot dogs, real hot dogs, and/or chicken and stars. He also had his first McD's Happy Meal this month...it was his first time to have juice, too! Yummy!
12. We, so badly, want Q to kiss us! We kiss him ALL of the time and feel that he'll catch on soon!He used to suck on our chins but has stopped doing that. This month he did start making the kissing sound when we ask for a kiss. He just doesn't actually kiss us yet! I'm patiently waiting for the day!
13. Quinn is going to bed between 8:00-8:30 and wakes up between 7:00-8:30 in the mornings. We're so thankful! It gives Matt and I some great time to catch up on all of our shows! ... He's trying to transition to one nap a day! Sometimes he'll take two...the first one is at about 10:00-12:00 and the second one is usually from about 3:00-5:00 or 5:30! He usually wakes up happy and ready to play!
14. We have a little ham on our hands! He is hilarious at church now! He ALWAYS wants to be on stage in the youth warehouse...either talking on the mic, playing the drums, or just climbing up and down the stairs! I have a feeling he's taking after his Daddy in this area and I love it! 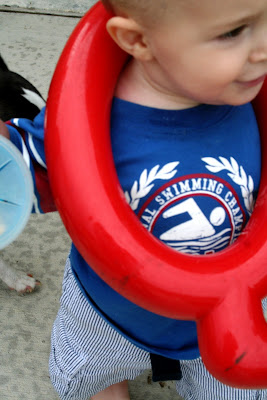 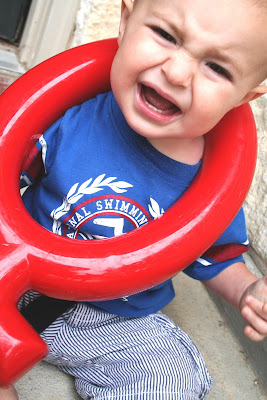 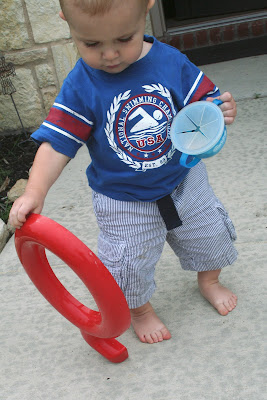 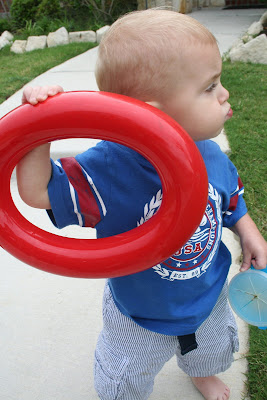 Memories by ThePoeFam at 5:32 PM