Last Monday night, while grabbing a few things at the store, Quinn requested to look at the toys! (what else is new!) And, while browsing, he came across the cool, new Toy Story 3 section. When he found one that he was extra interested in, Matt and I spontaneously said that he could have that toy if he slept without his “that” (his beloved passy) for FOUR nights!

Immediately, the little ploy didn’t get the most positive feedback, but after I talked about the chart I would make and how HE COULD DO IT, he started to seem a little excited.

So, that night, we came home and I made the chart. And, that very same night, Matt put him in bed with NO that! 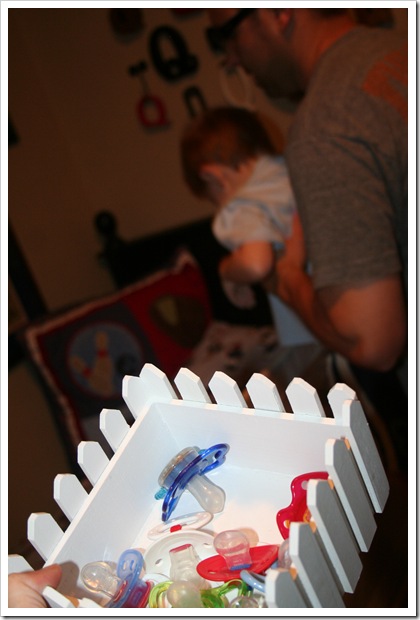 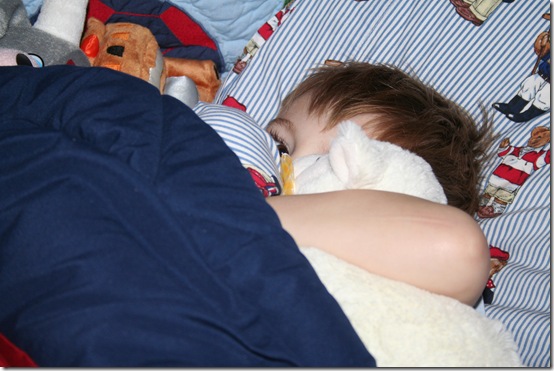 I must admit that it did break my heart a little bit. “That” has always been his only consistent “lovey” and I hated that we were taking it away. Honestly, the fact that he still used it didn’t bother me…even thought I knew he was WAY too old! But, it was now (before Nash’s arrival) or WAY later…because I knew myself too well to know that I WOULD NEVER take away his “that” when his baby brother had one all of the time!

Anyway, after less than 10 minutes in bed that first night, he started to fuss a little bit. So, Matt went in there and he said, while sitting up to look at his chart, “I know I really want that toy…so, can I at least have a drink of water!?” Bless him! Good thing Matt went in there…I may have caved!

But, HE DID IT! He woke up twice in the night, but easily went back to sleep…and, when he woke on Tuesday morning, he put his first sticker on his chart!!!!

With each nap/night, it seemed to get a little easier and he seemed more and more proud of himself. During the four days, he learned Philippians 4:13…I can do all things through Jesus who gives me strength…and he would tell EVERYONE he saw that he had slept without his that. He’d say, “I did something that made Mommy & Daddy REALLY proud!!!” And, he was right!!! We were SO proud of him and his determination!!!

The third night he had a hard time going to sleep, and when I went in there to encourage him, he said, “Mommy, it’s kinda tough to sleep without my that!” But, he never asked for it and never cried! Such a big boy!!

During the third afternoon, while we were working in Nash’s room, he said, “Can we just bring my basket of that’s in Nash’s room? I don’t need them anymore!!!”

…And, after pushing through…and REALLY wanting that toy, on Thursday after naptime, he added his last sticker!!! He was SO excited and danced around (which explains the blurry pictures) for a long time! We called friends and family and celebrated his accomplishment! 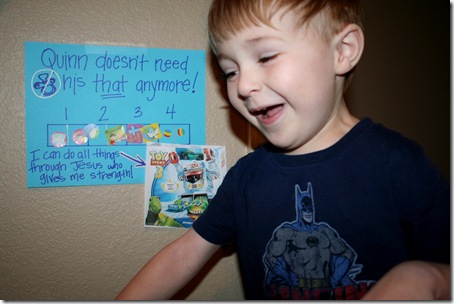 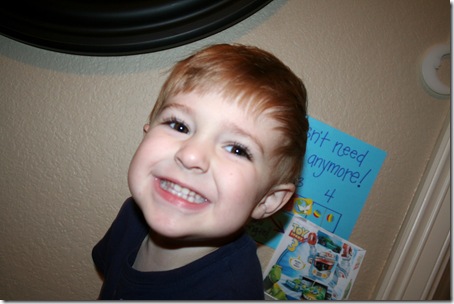 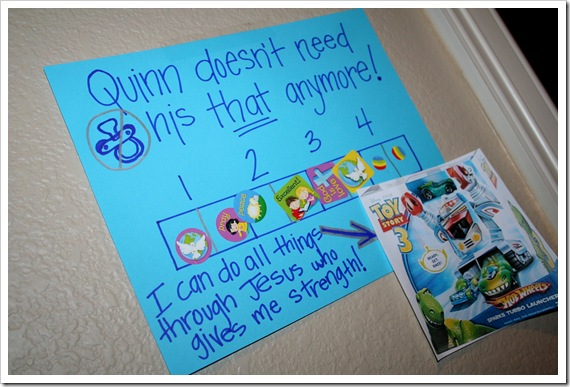 Then, when Daddy got home, we went to the store to claim his prize!
You deserve it little boy! We are SOOOOO proud of you!!! …
… And, if I’d known it would be this easy, I would have done it a lot sooner!!! 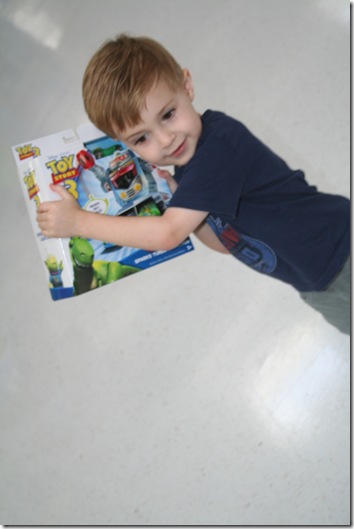 oh my goodness, this post just gave me such anxiety! Jagger is a HUGE paci fan (only to sleep, but still, if he's tired he wants it) ... and I've always tried hard to NOT worry about it. But I know it's getting time, and it breaks my heart for him. I have the feeling it won't be quite this easy, but I'm definitely going to give this route a try. I know how relieved you must be!

Such a creative way to get him to give it up! I feel for you-strangely none of mine have gotten attached to pacifiers ????? Have no idea why! Ty started needing his "blanky" to sleep early on and he still has it much to his daddy's dismay :) both of my girls were quick to suck their thumbs...and I gave them all pacis from the get-go. Maybe I chose the wrong kind? Ha! I've heard that dealing with the aftermath of thumb sucking will far outweigh any pacifier attachment...I'm a little scared...I mean, they have it all the time and anywhere. And dental bills will be torture.

Anyway, really good idea to try! Thanks! What a big boy :)

Love this! Go, Quinn!!! Lauren uses her paci for bedtime and naptime and we use a little "binkie bin" like you guys to store them for that purpose only. She will be 2 in July and I know we've got to start letting it go as well, but oh my! My heart hurts just thinking about it. She loves her binkies!!! And she just looks so darn cute with one. I feel like when she loses it she won't be my baby anymore! :(

Way to go, Quinn!! I'm dreading the day we try to wean Brady off his paci...hope it's as easy for us as it was for ya'll!

this post brings me encouragement! (just like your potty training one last fall :) - you are a few steps ahead with quinn!) jayden still sleeps with his paci and i just haven't had the courage or feel the need to stop it yet - he has transitioned with everything else so i feel like it is not too bad :) i like the chart idea with a good prize at the end - maybe we will try it soon!

My oldest was 3.5 when we stopped doing her nighttime paci. She transitioned MUCH more easily than I had expected.

Hey, it was great to see you guys last night. Just wanted to send you a link to that camera lens, in case you are interested: http://www.bhphotovideo.com/c/product/12142-USA/Canon_2514A002_Normal_EF_50mm_f_1_8.html. It was recommended as the absolute best value for portraits. Hope to see you again soon!

I didn't have time to read the full post about this because I just heard my girls crying from their nap but did your son call his plug (pacifier...we call it a plug) a "that"? That is what my son called it as well! I think because we'd always say, "Where did you get 'that'?"...so even now with my girls he calls them, "Lilah's that" and "Lexie's that" even though we refer to them as plugs! Too funny! New follower to your blog! Can't wait to see baby Nash!