...That's how old my little guy turned on Friday. (And, I only know that because my trusty birthday ticker told me so!) And, here's what he did on Friday morning before we {tried} to sell his first car seat and stroller on Craigs List. ...How big is he? And how did he used to seem so tiny in that seat?
{here he is in that same seat when he was just 2 days old...on our way home from the hospital!...sweet little love!!!!...} 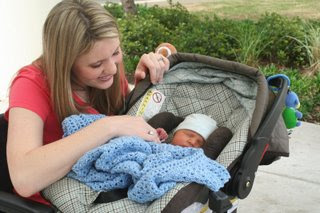 *One evening, I had just gotten out of the bath and was wearing this cute little cotton nighty I have. (nothing risque...don't worry!) Quinn has seen me in it a hundred times, but this time he said, "You got hearts on you dress, Momma! You beautiful, Momma. You look good. You feel better? You got out of bathtub? I lub you, Momma!" Oh, melt my heart...that he thinks these things when I'm at my worst! :)

*While playing with his stuffed animals, he said to them, "Where your shoes? Where your crocs?" We've created a monster!

*Quinn has started singing along to ALL of his favorite songs...and La-la-la's the tunes of those songs while he's playing! It's hilariously cute!

*Quinn often looks at me out of the blue and asks, "You happy, momma?" How could I not be, little boy!

*Recently, he loves to "read"...he'll see signs and say, "That says "chick-a-fil-a....That says Toys R Us!" ...and so on. One day, I asked him to read his little heart jibbit on his croc that says "MOM." ...Not having a clue what he would say, he said, "That says 'a joyful heart is good medice!" ...from the verse that he learned that says A joyful heart is good medicine but a broken spirit dries up the bones. Proverbs 17:22. I love how his little mind/heart retained that. Makes me want to be better at teaching him more scripture!

*Quinn is all about his right and left. So, in the car, we've been practicing. Now he'll say..."Which way's left, Momma? That way! (while pointing) Light's green, momma. Go left!" ...And, crazy enough, he gets it correct lots of the time!

*Lately, Q loves to asks us questions in hopes that we'll ask him the same question right back. "Whatcha doin' Momma? ... You hungry?...You firsty? (thirsty)..." A little manipulation that works in his favor!

*Tonight, after our bedtime ritual, I turned off his lamp and started singing the song that I sing to him every night that I made up right after he was born! ...And, for the first time, he sang along! It made me cry! I love him so!

Uhhh, what a gift these sweet boys are! Glad to share in your sweetness, what a precious little one you have!!! :)

so cute. i bet that's so fun to hear him start talking so much!

That is crazy how much he talks! My son is about two months younger and does not talk that much. I know it is coming though and I am ready to hear those cute things!

Q is at a fun age. Reading all of those adorable little stories reminds me of all the sweet things my little guy did for the first time. It is the most precious gift to guide little ones and watch them grow! I just love that I have been given this gift!

I love it when Mason asks "You happy momma?" with a huge smile...they are precious! Quinn is such a great talker :) It is amazing how much older they seem (even though they are your baby) when the 2nd lil one arrived!

Thanks for coming to the shower on Saturday! I was just teling Peter how I was telling everyone how I'm sending my kid to your house for pre-school. THANK YOU for all the books!!!! We are so excited to start reading. PS, you're selling his carseat on craigslist? Hmmmmm, maybe I'm interested?? I'm confused about what to get anyways. I don't think I want that crazy travel system. I think I just want a carseat with on of those clip on stroller things....I just feel like the travel one is a waste of money. I want the jogging stroller too.

Quinn is such a little love!! Absolutely precious and so sweet!! We had so much fun with you guys yesterday :) We miss y'all!! Can't wait to see you guys again :)

Brittney, it was nice to meet you today at Hobby Lobby. I can't believe I ran into someone from "blog land" and we recognized each other! I always enjoy reading about your sweet little family- and ya'll are just as cute in person!