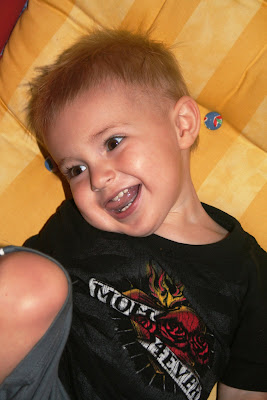 Quinn was hilarious today! He's hilarious lots of days, but today he seemed to be laying the hilariousness on extra thick. Maybe it's just his age...and maybe I'm going to have more and more of these precious little stories...but, for today, here are three of my favorites...

1. This morning, I was holding Q and he kept asking for "coke!" I kept telling him that he couldn't have coke but he was persistent and kept asking. Eventually, after not getting his "coke," he started to fuss...and then it dawned on me that he was wanting his MILK! He usually calls it "boo," so I didn't know what he was talking about. When I said..."Oh, do you want your milk?" he said, "Yeah!" So I walked to the fridge, pulled it out, and as I'm handing it to him he says {clear as day and in a very exasperated tone}, "Goodness!" It's like he was saying...Mom, what took you so long to figure that out! It killed me!
2. While in the bath, Q kept saying "Dabis" over and over. {We've been trying to get him to say his whole name, but when we ask him to say "Quinn"...he'll say "Dabis" (for Davis) and then "POE!!"...leaving out Quinn completely!} Anyway, back to the bath...after I realized what he was doing, I looked down and he was saying it while looking at the letter "D." I had taught him his middle name by holding that letter in the bath, and he apparently remembered. His preschool teachers might be confused when he thinks the letter D is a "Dabis!" Smart boy!
3. Tonight, right before we sat down for dinner, Q was getting VERY impatient. He was hungry and grumpy about it! So, we put him in his chair to let him know that dinner was coming...and he continued to fuss a bit...I told him to be patient and that we needed to pray before I gave him his food. He looked at me, reached his hand out and said "hand!" He was ready to hold our hands and pray for his food! I could have cried...what a sweet moment! ... And, when the prayer was over, he had a huge smile on his face!...Like he knew that he'd done something great! :)
Memories by ThePoeFam at 7:45 PM

Britney, I just heard that your grandmother passed. I am so very sorry. She was always so kind and sweet to us growing up at First Christian with her. What a wonderful woman, my sympathy for your family! God Bless! Meghan