So, today was one of those days...

We started happy this morning...Q slept until 7:30 (which is late compared to his recent 6:15ish wake up time) and we brought him into our bedroom to play...just like always! Matt got ready, Q and I ate breakfast...normal day! ... Then...I was outside taking a picture of Matt in his new Two-Five shirt for the website while we left our baby inside unattended. We were only out for maybe 30 seconds and Matt came in to find Q sitting in our bathroom floor playing with my razor. He came to me with Q saying that we were lucky that he didn't cut himself...whew! ... Then, I saw it...a three striped GASH on his right knee...and it was gushing!!! I panicked and immediately started asking Matt if we needed to go to the hospital to get stitches...of course, after a damp paper towel and a cool Clifford band-aid, everything was fine!...except for this HORRIBLE MOMMY! Who leaves their razor so their baby can get to it?! And, bless his heart...he was apparently just trying to shave his legs just like Mommy! ...he was much more irritated that we were making him sit on the counter and stop the bleeding than he was about the pain of his 'boo boo.' Tough little guy!
{See his bandaids...and the little red razor mark above that!} 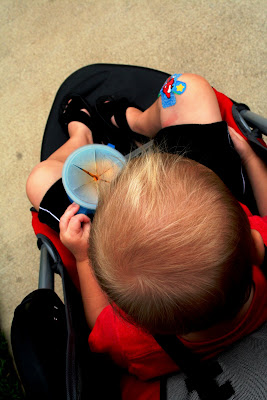 Then, to make myself feel better for my irresponsibility, Q and I got dressed and headed outdoors for a fun neighborhood walk to the park. We had so much fun...talking, playing and pointing to everything in sight. It was a cool morning, so we stayed out a little longer than I had planned. When we got back to our house, Q was so happy sitting in his stroller, so I decided I would pull a few weeds. {ok, maybe more than a few...we haven't gotten the "Yard of the Month" for a reason!} Q is happily eating his "cackers" and watching me slave away in the flower beds. Then, out of the corner of my eye, I see his stroller start rolling backwards...down one step, and another, and another...and that's all before I could get to him. Once I get there, I grab the stroller as it tips to it side and then on top of my baby. He's kind of whining but not really...maybe it was fun? Regardless of the "Six Flags Experience" that I provided for my baby, I felt HORRIBLE. I quickly got him out, checked him over, and hugged him...apologizing over and over. Why did the stupid wheel lock not work? And, what in the world is going on with this day?

{The picture shows where the stroller ended up...and it started by that pile of weeds on the sidewalk!} And, to top it off...I gave my baby his first real "correction" today! He continued to get into something that he had been asked not to 100 times, and he needed to understand that "no means no!!!" He was heartbroken and so was I! I called Matt, all teary eyed, to tell him that I had done it...and he quickly reminded me that Q was fine!!! ...

So...after a prayer, the horrible day that we started with turned into a pretty good one. Q and I watched Boz together, shared a strawberry milk shake at the grocery store and danced to lots of songs! ...Hopefully tomorrow I won't feel like moving to Australia! {if you've read the book...you teachers out there...you get it! :)}

oh, bless your heart. hang in there. you're a good momma.

btw, mike met boz the bear's wife the other day at a church event. they live in d! she made a boz-like comment and then admitted she's married to boz. he was starstruck. :)

I think we all have days like that! And I'll be the first to admit that I left my razor out once and Addie cut her thumb with it. I felt horrible and she still talks about it.

You'll have many more bad mommy moments, but hopefully not all in one day. Q will survive them all, and so will you.

Don't be too hard on yourself. I've caught Luke "chuggin" on a bottle of sunscreen and hanging from the chandelier in the dining room, so no worries....boys will be boys.

that is too funny- you are and will always be a gret mommy.