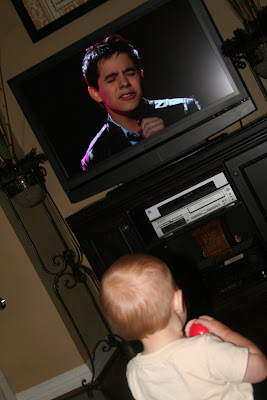 Last night, after a fun dinner with the Faulkner's, Matt, Q and I came home and went right to bed. We were tired! But, you'll never believe what I did in my sleep...let me tell you a little bit about it...It was current day, and I was on a huge stage with my preschool class. We were sitting in a long line with other classes. Crazy enough, it was the American Idol stage, and I wasn't just a guest...I was David Archuleta's pianist. So, as time got closer to performance, I was made aware that my little class had to take a potty break. So, during commercial, we marched in a single file line down the isle to the restroom. When I came out of the restroom, David was sitting to the right of the piano bench and the cameras were rolling. He was waiting for me to get there so that he could perform. I was a nervous wreck and began jogging down the isle...telling me little class to hurry behind me. When I got on stage, I apologized, got the class to sit back down, and sat down at the piano. When I looked at the keys, they weren't normal piano keys...they were in lines like a computer keyboard and were all rhinestones. I panicked but thought that the song {I Can Only Imagine by Mercy Me} would just come to me as I started playing. I tried, but I failed! It was wreck. I apologized again and David was politely smiling {like he does so well} and saying that it was ok. So, he turned to his laptop {which was right there next to him, of course} and looked for the song to download. He found it, but it was horrible, so he proceeded to sing acapella. He stood next to the piano and sang to Jesus while the entire auditorium worshiped with him. I was sitting on stage with my class just mortified, but thankful that he was doing so well! ... Then, it was the next day and I was having dinner with our worship leader and his wife. I asked him if it was horrible on TV, and he told me that it really wasn't that bad. He assured me that David would make it to the next round. WHEW! I was relieved...can you imagine if David Archuleta's American Idol fate rested in my hands? .... Then, I woke up and laughed at what I had dreamt. Thank the Lord it was a dream! My piano skills would definitely send Dave packing!
Memories by ThePoeFam at 10:59 AM

hilarious brittney! I can't believe you remember your dream so vividly! I did that when I was pregnant :), I had the craziest dreams!

That is the funniest dream ever! I love it!! I bet if he were singing "Carol of the Bells" you could still play it!

That is SO funny!!! Sounds like one of my wierd pregnancy dreams :o)

Oh and that first pic of y'all at the Arbo is AWESOME! Really, they all are, but that one is really great.