What does a duck say? 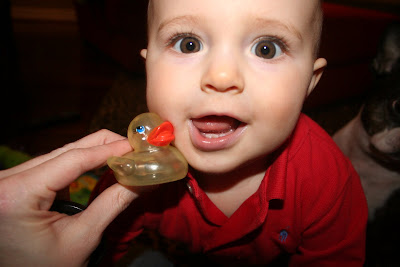 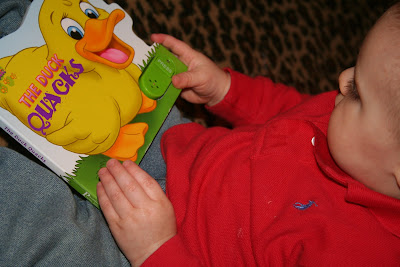 Yep! Quack was Q's first word! I guess it's a word...I think it's actually an onomatopoeia, but those are still words, right?! It's so cute to hear him say it! After lots of quacking to him and pressing the button on his duck book, he said it! He'll now often respond to the question, "What does a duck say?" and will also see his duck book and start quacking. I thought it was appropriate that he chose one of the few "Q" words to be his first word! He's so smart!!! :) But, my prediction was wrong...I thought Quinn's first word would be "Kia," but I'm happy with "Quack!" 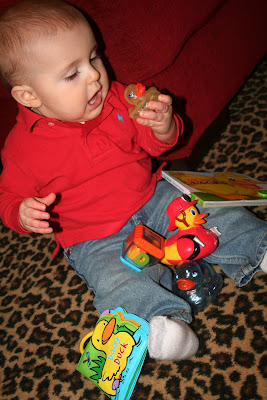 {Quinn has said Momma and Dada too...Dada first, sadly...but I didn't want to "count" that as his first word. Lots of babies say those first...I'll "put the sticker on the calendar" for quack!}
Memories by ThePoeFam at 11:14 AM

Hmm...quack seems like a very advanced word for a first word. He must be a genius!!

Thanks for your offer to help with the scrapbooking. I would LOVE to see what you've been up to in that department....not to mention that it has been WAY too long since I've even seen you (and I've never met sweet Quinn which is a total shame).

Send me an email at myfirstandlastname at gmail dot com and we can make some plans.

I never would have guessed quack! willies first word was da da, them ma ma, but if we go by real first world it was dog.. he looks right at pumkin and says dog dog. very cute! i love the picture of Q. your going to hang too. love love love it. you will have to take some pictures of us whenever we finally make it to texas!

how appropriate that a q word would be his first! I am sure it is the cutest little quack ever! If I am not to late....I choose #1!! Love u!