Last night, while cooking some dinners for people at my school, I looked down and saw a HUGE yellow puddle on the kitchen floor that could have only come from my 'sweet' Krozby! So, I snatched him off of the red chair, put his nose in it, and spanked his little bottom two or three times while yelling, "BAD BOY!!! POTTY OUTSIDE!" Then, I proceeded to put him in the backyard...while still saying, "BAD BOY!!! POTTY OUTSIDE!!!!" (Are you getting a picture!?) I huffed back to the kitchen, grabbed the Resolove and started to clean. As I did, I realized that the yellow puddle didn't really look or smell like pee. Was there a chance that I had spilled something or maybe he had thrown up his water? Hesitantly, I walked to the back door and went outside to get my poor, possibly innocent, puppy! He was cowered against the house...obviously heartbroken that I had spanked him and yelled! I picked him up, loved on him...and if you can believe it...started to bawl!!! I couldn't beleive that I may have spanked (HARD!) my sweet boy and he didn't even do it. I called Matt (he was at a STARS game with a youth kid and his family!) and just cried and cried!!! Once again...what am I going to be like when I have children? ...Anyway, after my tears and much love...he forgave me! I think it only took him about 30 seconds to forget all about it!!! 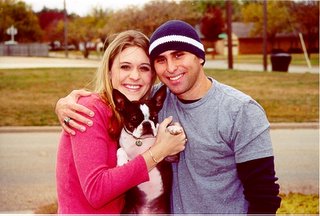 This is a old picture of Matt and I with Kia (September 2002) when I was still a good mom!!
Memories by ThePoeFam at 1:00 PM